When I first started flying helis, I had no idea what a swash plate is, let alone that there are many different types of swash plates. So, in this article, I would like to take a closer look at the different types there is and maybe try and lift out the pros and cons for each.

A swash plate on a helicopter has the function of converting static control input to a dynamic control input. The servos being the static part and the spinning rotor being the dynamic part of the control. In the time that helis have been around, there has been many advances in swash plate design and today there are basically six types of swash plates on the market. They are single pitch servo, 120deg forward or backward pointing, 120deg left or right pointing, 140deg, 90deg three servos and 90 deg 4 servos. 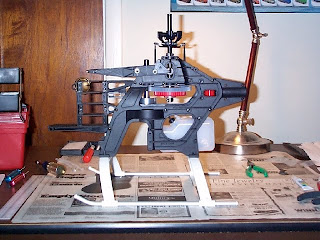 The swash plate of this system has the balls spaced at 90deg intervals with the elevator balls on the sides and the aileron balls set at the front and back of the swash plate. As you can see in the picture below. 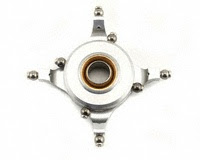 The good thing of this setup is that it was very easy to set up and no real swash mixing was required on the radio other than the throttle/pitch mixing. This system could be used with basic radios. Also there as not a lot of servo interaction where the one servo’s movement effected the other. Also, because the system worked with levers on the pitch, weaker servos could be used to control the pitch.

The bad part of this system was that due to the complicated leverage system, slop on any link was amplified so that control issues were noticed quicker. Also the extra leverage booms for the pitch made the heli heavier.

These days, this type of swash plate is the preferred system for most helis on the market. The system consists of three servos connected directly to the swash plate in a 120 deg orientation. The forward/backward pointing just indicates that one point of the swash plate’s 120deg point will be located in the center of the chopper either pointing forward, or pointing towards the back of the heli. Below is a picture of a 120deg swash plate. 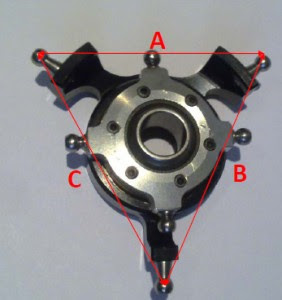 In the picture above, A=B=C.

The good thing of this swash setup is that the servos are normally connected directly to the swash plate, though, there might be a simple lever system in place to increase the amount of power the servo can put on the swash plate. This decreases the chances of slop and the effect slop has on the control of the heli. Also, because your servos are directly connected to the swash, the control input becomes immediate and crisp.

The bad part about this setup is that it is not easy to set up. Special tools are required to make sure the swash is level and travels level up and down the main shaft. Servos must be of a higher torque rating than the single pitch servo swash setup. Another big problem experienced with CCPM 120deg is that servo interaction is very notable. Servo interaction happens when the change of one servos position directly impacts with the other two servos in the setup. This can happen on cheaper servos where the one servo runs faster than the other, or when setup was done wrong. In this case the heli will, for instance, veer left when pitch is given.

This swash setup is basically the same as the one found on the 120deg swash plate with forward or backward pointing. In this case though, the one point of the swash plate points to the sede of the heli and the other two points are situated on the other side of the heli. In my research for this article, I could not find any reason why this is so and I have myself never seen a swash setup like that, but I wanted you just to be aware of this swash type.

This swash plate looks like the 120deg swash except that two corners of the triangle are closer together than to the other. Using the same picture as above you will see that C=B, but A < than C or B. Below is a picture of a typical 140deg swash plate. 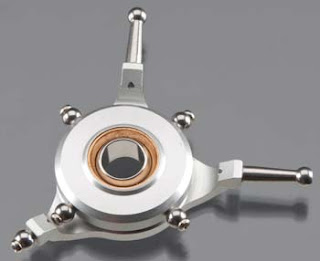 This swash plate is in essence the same as the 120deg swash, which is better known as the CCPM system. It suffers the same positive and negative issues. Though, there has been discussions about the available travel being less than on the 120deg swash. Another concern is that servo loadings may become unequal due to the unequal spacing of the points on the swash plate.

This is also a CCPM setup like the 120deg swash setup, but the points on the swash plate is set at 90 deg to each other. Belo is an example of such a setup.

The advantage of this swash plate is that the interaction between the servos are a bit less, but proper setup is still required for proper flight.

This is a derivative of the 90deg 3 servo swash and is considered as probably the best setup for helis. Below is the swash layout of this layout. The other picture is basically the same, but the 90 deg cross is just turned sideways.

This setup has been considered to probably be the best setup for helis still. The main reason is because you are using four servos in a 90 deg configuration, the force you can assert on the swash plate is so much more. This means that you can do harder maneuvers without the danger of stripping a servo.

Well, not you know more about the types of swash plates out there.