RC helicopters has come a long way since the first production heli came on the market. Many changes has been made to the original design which was basically just a fixed pitch main rotor aircraft and did not even have throttle control or a tail rotor. The newest main change to RC helicopter, of course, is the invention of the flybarless rotor system.

Even though Igor Sikorsky invented the first helicopter, it was Arthur M. Young that invented the first remote controlled heli. He originally experimented on refining Sikorsky’s designs and to do that he had to develop a small helicopter that would react like the real thing but did not cost an arm and a leg to build and rebuild. It was also Mr Young that invented the stabilizer bar, or later called the flybar in RC helis. It’s main purpose was to counter unwanted rotor and fuselage tilt and increase overall stability. This, of course, is the main purpose of the flybar.

Using a flybar on your heli has it’s drawbacks. The biggest drawback being the amount of power it steals from the motor of the heli. A flybar can steal up to 25% of the motor’s power output. This is mainly caused by the extra drag the flybar system creates while spinning as well as the extra mechanical components that is required to make it work. For normal flight, this is all fine, but we all know everybody aspires to do the ultimate, 3D flight.

During 3D flight, you want the main rotor to get as much power as to be able to generate the extreme lift changes needed for 3D flight without dropping rotor speed or bogging the motor.

So, as you can deduct by now, a flybarless rotor is a rotor setup where the flybar has been mechanically removed. And here is where the problem starts. Because you remove the part that stabilizes the heli, you now have to compensate in another way. Being quick on the sticks is one, but I have not heard of anybody that could fly a flybarless heli without stabilization.

The idea of a flybarless system is not new. In fact, there has been pilots that has been experimenting since the early eighties and to make it sort of work all types of funny stabilizations systems were invented and tested. None of them very successful and all of them required very skilled pilots, so the flybarless system never really took off.

Enter the electronic age. During the nineties electronic gyros were rapidly developed and refined to an affordable way of stabilization. Some of the pilots saw the advantage of a small and lightweight electronic device that would replace the old mechanical stabilization systems. It is not until about 2008 that the electronic systems were developed to the extent that flybarless systems could become affordable to all. So, here we are.

Below is a picture of a heli head with a flybar. 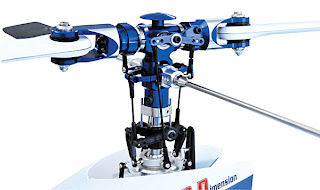 As you can see that there are a lot of mechanical parts in the setup of a flybar rotorhead. So let us look at the picture below of a flybarless rotorhead. 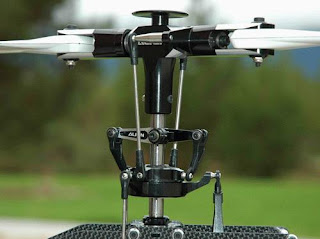 As you can see there are a lot less parts in the rotor head.

So what are the advantages in flying flybarless. Well, as we discussed earlier, one of the advantages are that you will have more power to the main rotor. In short you can do harder maneuvers without bogging the motor. The other advantage is that there are a lot less parts that can be damaged during a crash. It is also a lot more stable in flight due to the gyro stabilization to the main rotor head. The other nice thing is that with flybarless you have the opportunity to ad extra main rotor blades for a better scale look.

Are there any disadvantages. Well, I would not really call them disadvantages as the flybarless system is just so much better, but you have to remember that, at this stage, flybarless systems are still pretty expensive compared to the standard choppers because you need extra electronics and a special rotor head. Furthermore it can be a finicky to set up as the flybarless controller sometimes require quite a bit of setup. 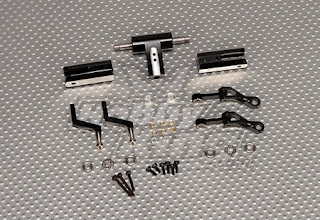 And then you require the 3-axis gyro control box. Below is a picture of a typical 3-axis control box. 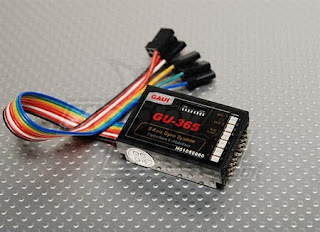 You called it a 3-axis gyro. What is it and why not just use 3 gyros. Well, it is basically a box that contains 3 gyros. These gyros controls the aileron, elevator and rudder. What makes this box different is that it has mixes programmed into processor that counters adverse movements (movements caused by the secondary effect of controls). This is not something you can easily do by building your own 3-axis “black box” with three separate gyros as the three gyros do not talk to each other.

Well, I hope you understand the flybarless system better now. It really is an interesting development that will still have us raving about in 10 years time.

Posted by Schalk Burger at 1:07 PM