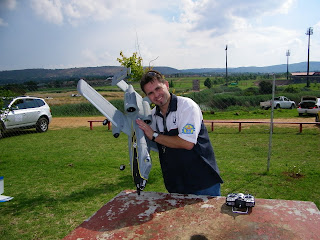 Hi, it's Shaun Hards here (official club photographer, or so they say). Thought I might contribute a small article to the blog so here goes.

I joined DDRF in the beginning of 2008 but never really got into flying because I bought the wrong plane to start learning to fly with (an EP Showtime from E-Flite). My first flight lasted all of 2 min. It was only until the middle of last year (2009), when I bought a small foamy Cessina, that started flying proper. It still took a few crashes and repairs to find my flying fingers, but I did eventually. Fortunately I had been racing RC cars, both electric & nirto for the previous 4 years, so the initial co-ordination was there, only the 3rd axis was lacking. As I've improved, so I've started to enjoy it more and more, and it now feels like "me flying the plane" and not the other way around.

Since I fly electric and batteries take some time to charge, I thought I would pass the time by taking some pics of the other guys flying and their planes. I enjoy photography as well so it as enjoyable as the actual flying. I was asked to send the pics I took to all the members by Peter the club secretary, who normally takes the pics (as that day he had forgotten his camera). Immediately there was a very positive response and a demand for more pics. Guys were mailing me for pics specifically of thier planes etc. I made many friends within the club almost overnight, which was great. I was instantly dubbed the "official club photographer", and my new duty became publishing pics to all the members on a regular basis.

I'm really enjoying the great atmosphere that has developed at DDRF, and to my fellow pilots, I just want to say thanks for a great 2009 and I look forward to 2010. I hope that in 2010 I can bring you more of the action and even better pics, sothat we can showcase DDRF to all out there.